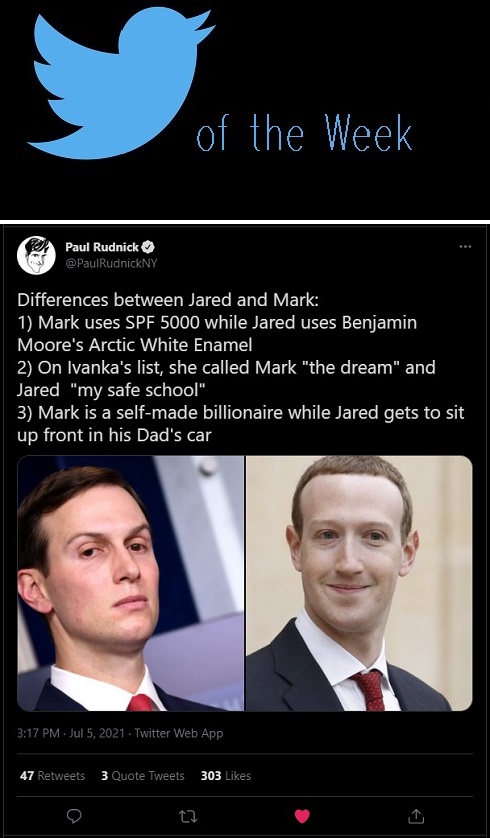 I soon have expect this weekly post to be all about Carlos!!!! I was dying over the weekly antics around. I wonder if Carlos knows how dead pan funny he is?

I don't know how much Tiffany trump will be helpful. She didn't spend anywhere near the time in the white house as the other dim twats. I till don't think any of them get jail or otherwise. I just have a feeling. they get out of everything.

And excellent new Tuxdeo is doing well and holding his own.

Ok, best thing I've heard this week: "hair ballage". I will be stealing that for a story soon!

(Carlos) (Tuxedo)- glad about his checkup.
Arlene's Flowers - I can say
I've been in there once - before
the kerfuffle. Haven't been back
since.
xoxo :-)

Carlos and El Gato Guapo (my superhero) have put a smile on my face which I'll be wearing for the rest of the day. Thanks for sharing, dear Bobulah.
I know nothing about packing, but Alex Beattie certainly gives good face.

Let's not forget that the Zuck and Jared are equally creepy; perhaps the Zuck has the edge, as he seems intent of trying to persuade everyone that he's a teenage nerd.

The Science Diets are good - Wolfgang recommends the JD diet

Oh, Carlos and the vomitocious laundry! And of course that’s something SG has done. They have to be related. I must admit, though, when SG talks to the cats and I KNOW he’s talking to the cats, “You are such a beautiful boy! Are you a beautiful boy?” I respond. Jared and Mark have dead eyes (Jared’s are the worst). So happy to read the good news about Tuxedo.

*Carlos is a dear-full stop!

*Sears and K-Mart-are they still around-what staff meeting did I miss where we voted on selling these damn t-shirts. What were they thinking.

*I am just tired of Jared, Mark, Elon, Jack D., and all the money-grabbing goons/enablers. I am just tired. When can the everyday man breathe a little? The last four years are continuing and we are ready to kiss our asses goodbye. I do have hope BUT it gets harder the longer it goes on.

*Tuxedo is the boss. He waited for his succession and grabbed the crown. Smart cat.

Zuckerberg gives me the creeps. He'll forever be 'that kid' that nobody wants to sit with because he's just plain creepy. Jared has the emotional range of oatmeal.
Kmart and Sears took that down in a huff. People came for them like there was no tomorrow. Love to see it.
And you know any 'conservative' will project like crazy because of course they do.
Glad Tuxedo is doing fine. Yay!
I LOLd at the Carlos adventures. Twice.
And men packing in sweatpants? Love to see it.

I love your Carlos stories. Ashli has become a martyr of the revolution. I didn't know Sears and K-Mart still existed. It's been years since I saw either one and much longer since I shopped in them.

Jared and Mark both look like villain vampires from The Twilight Series. Marks odd and clueless with no intent of harming others, yet he does. As for Jared? He's straight up evil - Imelda Marcos evil. Leona Helmsley mean.

Alex. I like what he's packing. But that said... he has the kind of face I want to slap, repeatedly.

Wow. Selling T-Shirts in support of a criminal. Interesting marketing strategy. I guess we know they want some of that money currently going to Walmart. Dinosaurs.

Oh dear... I hope the FBI has more to go on than just a lego set and a notebook. These creeps need to be put away for good.

Huh. There's another case... the bakery that refused to bake a cake for a gay wedding. It was actually decided by the Supreme Court in favor of the baker, if I remember correctly. I need to look that up... But hopefully Arlene learned her lesson. Or went out of business. Don't mess with the gays!

LMAO - I remember seeing this story about Philip Godlewski... The hypocrisy. Kettle? Beige.

I don't know if the Orange Ogre's spawn will ever see the inside of courtroom. Although, Cokehead Jr. should be arrested for possession any day now!

Aww. Carlos. Hugs and Kizzes to you both. Enjoy. And thanks for the feed.

@Maddie
Every so often, whether he tries or not, Carlos is the funniest human alive.
I think Tiffany knows enough about Daddy’s work, especially through her mother.
Alex is a hefty packer.
And we’re pretty happy about Tuxedo; he’s doing very well. Thanks!
Xoxo

@Deedles
Carlos and Tuxedo keep me smiling and happy every single day!!
Good face and good crotch, that Alex.

@Helen
We’ve always fed out animals Science Diet, and the K/D is for kidney disease.
And the Twin Vampire Boys ARE equally creepy.

@Debra
Thanks! Carlos and Tuxedo are so much fun.

@Mitchell
Luckily for me, Carlos oversees any and all animal discharges.
So, in this case, YOU are Carlos!!
Jared is dead, I think, and Ivanka’s just keeping him alive for the coins.
We’re all pretty happy about Tuxedo, and so is he.

@VRCooper
Carlos is the best, but he does crazy things—as do I—and better still, keeps me laughing.
Sears and K-Mart are so close to bankruptcy I think they thought this was a good way to make fast coins.
Jared and Mark and Jeff—especially Jeff—can, as dear AM would say—FOAD!
Tuxedo is the boss, and he IS one smart feline!

@Six
Your description of Fuckerberg and Jared is perfection!
That Sears Kmart shiz is why boycotts, and the threat of boycott, work.
We got double LOLs from Carlos this week, and Tuxedo, sleeping next to me now, is a happy camper.
Alex in sweatpants. I will be thinking on that for a while.

@Janie
Carlos is good fun, and always in on the joke.
I love anyone thinking someone who broke into a federal building is a hero. She was a rightwingnut QAnon gasbag who did the wrong thing and suffered the consequences.
Xoxo

@Dave
If Jared and Mark ever need coins, a horror movie might be a good choice.

@Upton
Well, Jared and Mark are both literally dead, so ….
Sears and Kmart are very thirsty for coins and I’m happy it backfired.
Tuxedo and I will think good thoughts for Wonk!
It makes me crazy that American terrorist use toys to plan their insurrections. We are so far behind other terrorists.
Yeah, the baker case. I don’t get why one is tossed and one is decided in favor of. But, I hope people remember these businesses that don’t cater to The Gays and stay away from them.

Philip Godlewski. Tool.
I still hope to see Junior and The Dumb One squirm. Ivanka will get off scot-free because Daddy will always hope there’s a chance to f**k her.
Carlos. Goddess, I love that man.
Xoxo

Cats and Carlos, you are surrounded by love

Cute Carlos stories! Maybe he needs to throw dirty laundry in the hamper rather than straight into the machine?! (Dave just leaves it on the floor or on a chair in our bedroom.)