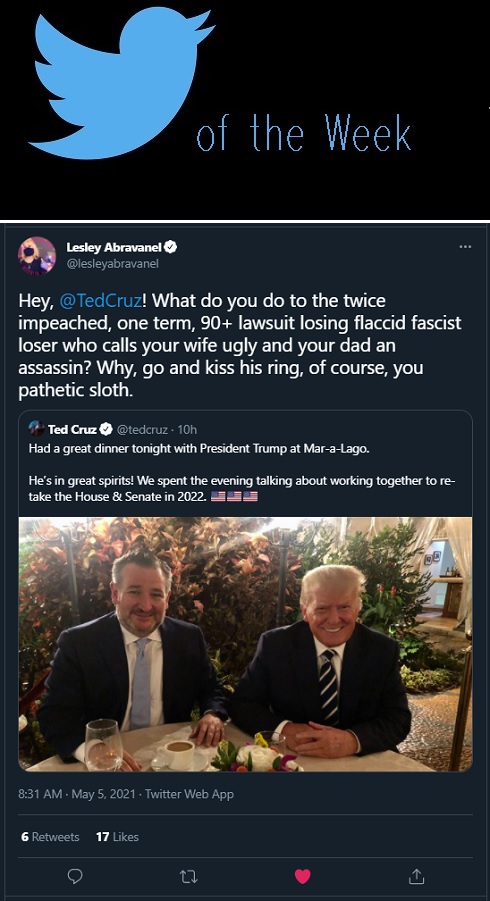 I love Tuxedo this week as much as Carlos! I love you too though Bob!!!! Taking a prick is just like riding a bike though. One never forgets..

“America First Tour”? Will Taylor Green being doing a Jewish laser show for entertainment out her ass?

Ted Cruz might be the biggest colossal loser there is. Such a wimp.

Yes I'm going there. Kimberly Guilfoyle is a cunt. It creepy junior fucks someone that looks like step mummy.

I've been very pleased with Tom Wolf. Ill be sorry to see him go. I just hope we can keep the governor a democrat.

It's beyond me why no one has slipped one of the pills in McTurtles coffee yet to make him go into cardiac arrest.

Now someone go tell Daniel Dexter that Im here on my fainting chaise waiting on my back......

You and Carlos made me laugh, as usual. Tuxedo made my eyes well up. I'm through with cunts and assholes, so I won't comment on them. Looking at that piece of young man candy I realize that I prefer something a little less perfect and young, except for Maddie's bodacious booty. That tweet!
I hope I can get away with cunts and assholes. I usually don't talk like that, but sometimes there's no other way.

Hahahaha
Love Carlos. You know that I'll always side with him, right?
Tuxedo! Yes, honey. Getting old sucks, but you TRANSCEND.

The GQP is a clown car of fuckery. Nothing new there. And they've taken on Trans folk as their rallying cry. The gheyz are getting married now, so they're not as easily targeted.

That tweet made me LOL. Really. Pathetic sloth does not even describe Rafael Cruz.

And if you happen to have Daniel phone number, would you share it? I think I've pulled a muscle...

Ted is such a fool tool. Hope he gets his. And he is just getting uglier by the hour, huh? Like he's morphing into the monster we all know him to be. Pathetic sycophant, dangerous and unfit for public office.

Daniel has permission to seek me out in 20 years. Although, at that point? The only thing I will want to do is slap his face. His pretty, pretty face.

I applaud McConnell's honest. He has no integrity, zero. It is the only good thing to come out of the orange ogre's reign of terror... the Repugs are reveling themselves to be the monsters we always knew them to be. Get rid of them all.

Just imagine all that the orange ogre could have accomplished if his goal was to earn money honestly instead of grifting? He's resourceful... in a bad way.

I saw Guilfoyle's interview. What a joke. Fox has nothing to work with so they put on coked out whores like her and let them say anything. Fox News has become such a joke. So... thank you Kimberly the Cokehead. You are doing the public a service by exposing Fox News for the useless bottom feeders they have always been. Eat Murdoch.

Congrats, Jace. That is an amazing accomplishement.

Oh, dear... Matt and Marjorie. Pass the Kool-Aid. What a pathetic cash grab. Next they will be on The Home Shopping Network selling merch made in China. Poor Matt... you must be really hard up when your redemption tour depends on a sack of wind like MTG. Both dicks. The can F themselves.

Tux. It's hard when they start showing their age. Our dear Wonk is 21 and having a hard time. He's still relatively healthy, but his arthritis is super bad which makes him crabby. He has such a time getting up and down, we've devised little helpers throughout the house so he can get on the couch, a table, a chair, the bed... love them while they are here with us.

Carlos. So cute. He needs a spanking.

Thanks for the feed. Love it, as always. Kizzes.

I'm sure you know that cats can live until they are 30, which is a long way off and Tuxedo loves life living at Casa Bob y Carlos. As far as the jumping goes - he hasn't got arthritis has he?

tuxedo and my nyla are about the same age. nyla can chase gigi around the house like nobody's business.

FUCK ALL THE INSANE GQP INSURRECTIONISTS!

we LOVE tom wolf; after all, we DID have (trans) dr. rachel levine as our state health director before she took a federal post.

So sick of the never ending political saga of idiot republicans and Magat commentators who have no credibility and the unrelenting physical, emotional and legislative attacks on trans persons. Here in what many consider a backwards state (NM) we got our vaccine super efficiently in a huge civic center, then received a text message immediately to start our 15 minute wait and another text when the 15 minutes was up saying we could now leave. I was impressed.

HRH had kidney issues in old age too and ate a special cat food I had to buy at the vet's. Hugs to Tuxedo!

Carlos might definitely want to give up his day job!

Just so you know, I had a diabetic cat that lived to be 21 years old.

Wolf is a great Governor!!

I've seen Carmine before, and a girlfriend? I thought you knew just about everyone starts out having a girlfriend.

@Maddie
Yeah, Tuxedo and Carlos are getting mad love this week and they desrve it; and me, too!
If MTG could shoot lasers out of her ass she’d be at the strip club and not in congress!
TedCruz is the most despised person on the planet, and desrvedly so.
And, yes, she is a cunt.
Tom Wolf just seems to be common sense, a raity in politics these days!
Bitch McConnell tried this same bull shiz with Obama and Obama got his things done; Joe will do the same.
Daniel is quite dreamy. I may share the wealth …

@Deedles
Carlos cracks me up.
Tuxedo, with his new stuff, breaks my heart, but he just keeps going and doing and being, so all’s weel for today.
Please, cunts and assholes are words you can use here! Heck, I do!
Daneil is quite the specimen, or speci-man!
And poor lying Ted always looks the fool, even sitting bnext ti the twice-impeached, one-term loser.

@Six
Everyone sides with Carlos and I’m good with that.
Tuxedo transcends. That made his day, and mine!
I am so sick of trans being the new gay being the new black being the new other.
Nothing screams sad like sitting next to the guy who called you a lair, said your father killed Kennedy and called your wife ugly, and being thankful for it.
Once I’ve finished with Daniel I’ll send him along, but Maddie called first dibs, so he may be nothing but a shell of his former self after that!
xoxo

@uptonking
Ted is ugly from the inside out.
I’ve given Daniel permission to come a’calling in2041.
Bitch McConnell said the same thing about Obama, proving he will not work with a Democrat and should be removed from office. Fucking obstructionist turtle.
I just find it telling that Guilfoyle acts like a stripper and shakes her ass and her ballooned boobies at every GQP event as if being a Botox Barbie stripper is something to be proud of.
I get some good ideas from HGTV for certain things, but I do them myself so I know they turn out right …and correct.
You’re on point about Wolf and Jace and Ohio.
Matt and Marge should get a show on Bravo …The Real Dumbfucks of DC?

Tuxedo is still getting around and doing all of his things, but he’s just decided that jumping is no longer a thing.
We had a cat named Scruffy in Miami who was an inside/outside cat, and one day he came back into the house and decided he would never go out again and didn’t. He lived the rest of his life as a totally indoor cat. They’re smart like that.
You really wanna spank Carlos don’t you? I may have to get a paddle.
Xoxo

@HelenWe had a couple of cats live into their twenties. But we’ve had a couple that didn’t make it to ten. He doesn’t have arthritis, he was checked, and we were told it was simply an old age loss of muscle mass in his hind legs.

@AM
Tuxedo still works over Max but he’s a bit slower. But that’s okay, he’s allowed.

@Frank
The lies, the blatant, unproven lies they spread, while doing absolutely nothing to move the country forward infuriates me.
And using fear, ignorance, of trans people as a weapon is low.

@Debra
Tuxedo was funny with the new food; he loves it, and now turns up his nose at those “other cat’s” food!

@Dave
Carlos has given up his day job, which explains Carlos today!
Yeah, Tuxedo is doing fine, I just feel bad he’s not the running jumping ca of before.
Carmine has the husband, but Mike, a hot baldie, has the girlfriend, for now.

Give Tuxedo a huge cuddle from me (and some loving from the brothers grim at my feet).

I was pricked by a gentle, serious, middle-aged women. I'm jealous.

@Mitchell
Carlos is very funny, and I find funny hot, so, yeah, hot.
Tuxedo will appreciate the hugs; he loves his hugs.
Im now wondering who will prick me on Round 2?

He may be getting old (aren't we all), but Tuxedo doesn't have a bad life does he!


Ted and Loser look like they're on a Date... as for The Demon Spawn, the source of their entire existence is evidence enough that Demons Spawn Demons.