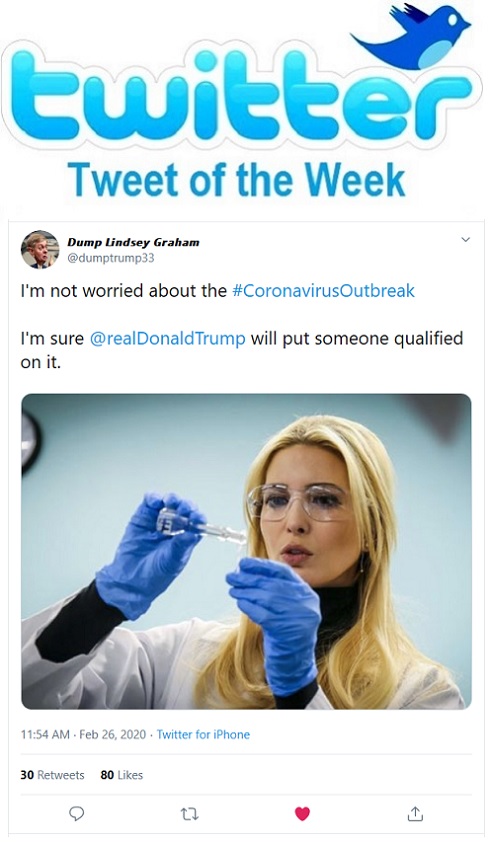 Now you know trump will not put anyone qualified on it. There background will probably be transportation.

Glad your back to feeling good. But I almost forget what i was going to say....because of Andrea.

Yeah this time I'm not on Carlos's side, he's in for it. Funny joke about adopting the cats.
I'm not so inclined to laugh at the poor guy being sexually assaulted for trying to break up a fight. He could be injured for life. That player should have been suspended for life.

Biological cats? The births must've been a pain in the ass! Carlos has temporarily fallen off of his pedestal. He'll be back, though.
That tweet (twat?) is hilarious.

carlos, better watch your back when your husband feels better...(just sayin')...

My cold symptoms are usually not very severe, in fact, I usually only know I've had one because I get a cold sore.

And he put someone even worse than Ivanka in charge of his administrations Coronavirus policy... Mike Pence, who, even as I type, in on his knees trying to pray away the virus.

@MM
He picked Pence who believes cigarette smoking doesn't cause cancer. Asshats, the both of 'em!
Andrea did make me feel better, and, yes, Carlos helped, too!

@Steven
Carlos is still trying to dig out of the hole he threw himself into.

@TDM
We are both feeling much better, and I will always love the look on my co-worker's face.

@Debra
I love that he sent that gift!

@AM
Andy is quite a looker, eh? And an LGBTQ+ ally!

@Dave
I laugh at Carlos because his cold was a nine day affair, and mine was three, and ... wait, maybe he's right;maybe it isn't that bad?

The new acting DNI director looks like a Miller clone - perhaps there are more of them locked up in a cupboard somewhere and the Fatso-in-Chief will drag them out as needed?

Ohh get better soon!
I also got a cold and I've been trying not to bitch about it.
That last tweet describes this Kakistocracy soooo well! You know they put Mike HIV epidemic Pence in charge, right? Idiots!
And wherever there's a Dem in position of power in politics you'll most probably see good things. How cannot people see this?

Ouch- and only four days off!

The idiot put Pence in charge, we don't need a faith healer, we need scientists and physicians.

The adopted cats... You are such a smart ass! (And had us both laughing out loud this morning. As bad a patient as SG is, he’s that obsessive as a nurse. So far the only time he and Carlos aren’t in sync.

@Helen
I can only imagine what they have hiding in the WH cupboards!

@TRavel
But Pence did so well with HIV in Indi--yeah,even i can't say that.

@Mitchell
I am a smartass, and love it.
Yes, as good as Carlos is, his Nurse Ratched could use some work.