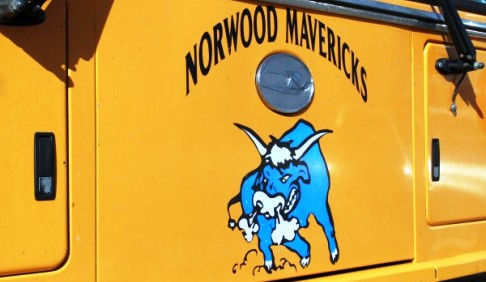 Boys will be boys.

Last year, at the Colorado state high-school wrestling tournament, three upperclassmen from Norwood cornered a 13-year-old boy on an empty school bus, bound him with duct tape and sodomized him with a pencil. Two of the attackers were sons of Robert Harris, the wrestling coach, who was president of the school board. The victim's father was the K-12 principal.

For the boy and his family, that was only the beginning because that boy who was attacked, the victim, suddenly became the target. After his father, the school principal, reported the incident to police, the good people of Norwood forced him to resign. And fort that boy, school became hell. Students put "Go to Hell" stickers on his locker and proudly wore T-shirts that supported the perpetrators.

Norwood sits high in the Rockies, a six-hour drive from Denver, and it is so small that its 300 students, from preschool through 12th grade, attend classes in a single building. The high school football team has just eight players instead of the usual 11, but the glass cases in the school's hallways show off sports trophies celebrating decades of triumphs from basketball to cheerleading.

"Pain is temporary" reads a poster on the wall. "Pride is forever." Apparently.

In 2011, Norwood won the state wrestling championship, and the following year they were back to defend their title. The team and the coaches boarded a bus to Denver for the tournament, while the principal and other school officials drove separately to cheer on the team.

The principal's wife grew up in Norwood; she met her future husband when he moved to town as a high school senior and they dated while in college. In 2000, they returned to Norwood and the boy’s father worked for the school for 10 years, first teaching computer science and auto repair, and then serving as principal for two years.

"We always thought it was a great area to raise kids. They were really happy kids, liked going to school, straight-A students."—The Principal

And their 13-year-old son was one of those kids, and he was especially good at sports. He started Pee Wee wrestling at age 3 and became a wizard  sports trivia, but in the months before the state championship, where everything changed, his mother become concerned that he was being teased at school.

In February 2012, the boy rode the bus to Denver as the team manager, in charge of videotaping the older high school students at the meet. When the coaches and wrestlers left the bus to weigh in, those three upperclassmen, those three rapists, pinned him down, bound him with the tape, pulled down his pants and assaulted him.

Right before the start of the meet, the boy’s older brother heard the rapists laughing about the assault on his brother and he told his father.

"I was shocked beyond belief, and I was mad. I do believe I was madder than I have ever been. You're trying to protect your kids, and then something like this happens."—The Principal

The father found his son, who confirmed the attack, and then he confronted Coach Harris—remember, two of Harris’ sons were involved in the assault—and Harris said nothing happened. In follow-up conversations, however, Coach Harris said, "This happens 1,000 times a day around the U.S."

The principal notified Norwood's superintendent and the school board's vice president, both of whom were in Denver. Given his personal involvement in the case, the principal agreed to step aside from any discussion of discipline and did not go to the police that night because he believed school officials would handle the incident properly.

Back in Norwood, Superintendent David Crews imposed a one-day, in-school suspension on the three rapists, and neither Crews nor the school board reported the incident to police; under Colorado law, any school official or employee who has reason to suspect a child has been abused should immediately report the matter to police or social services.

The principal complained to the school board about the punishment and, a month after the attack on his son, realizing that there would be no real punishment of the three rapists, he informed the police.

"I knew it wasn't going to be pretty. When you take on, first, a powerful family in the town—and he is also the school board president, and his kid had done something wrong—there is going to be something coming back at you."—The Principal

And while this lack of punishment was going on, that young boy would walk the halls at school while students taunted him with, 'What's been stuck up your butt today?" And, of course, these shining examples of the future took to Facebook, telling this young boy to, 'Rot in hell, liar!’

And then the students’ parents got involved.

Jennifer Long, an idiot, obviously, and a waitress at a diner in Norwood: "When I was in school there might have been bullying, but there was none of this crap about telling the school. How you going to be tough if you don't get bullied sometimes?"

Her husband, James Eilmann, who shares with his wife a lack of active brain cells, agrees: "I got bullied as a kid because I had long hair and earrings. I played football, baseball and soccer and the older kids bullied me. But we always shook hands and it would be over with. But today, you can get prosecuted. It has all gone too far."

I guess James Eilmann would have just been raped by three older boys and kept his mouth shut.

Frustrated by the 'protect-the-rapists' attitude of the town, and the lack of interest by school officials, the principal finally reported the incident to the Denver police. The police sent investigators to Norwood and on April 23 they arrested the three boys, charging them as juveniles with kidnapping, sexual assault and false imprisonment.

Makes one wonder how Cline would have handled his son, or, god forbid, his daughter, being raped on a school bus.

But one person, Marie Fouche, a substitute teacher, defended the principal at the school board meetings: "It seemed the whole town was against the victim and his father. It was all about punishment and not helping."

Helping. Like the way Jessica Bicknase helped. See, after the arrests, she was identified as the mother of one of the accused, so she paid to print T-shirts that bore a slogan using the initials of the suspects. A dozen students wore the Bicknase T-shirts to school and someone posted a sign with the same wording on the locker of the victim's brother. These students told police they wanted to support their friends, the rapists.

Jessica Bicknase declined to comment. She should have declined to be a mother all those years ago if this kind of behavior from her own child is somehow acceptable to her.

Police officers, after speaking to those students, went to their parents to warn them against intimidating the 13-year- old; the parents demanded to know what the police would be doing about the victim’s father, you know, since he started all this.

After the T-shirt incident, the principal decided to stop sending his son to school, and instead brought his assignments home: "My son was the outcast. He was made to feel like he was the one who caused the whole thing."

Late last year, one of the accused pleaded guilty to sexual contact without consent; the other two pleaded guilty to third-degree assault. They each received varied sentences that included probation, community service and restitution of about $2,500 apiece. For raping a young boy.

The principal's contract was up for renewal and after extensive negotiations involving lawyers from both sides, the board renewed his contract, but put him on paid leave while it reached a settlement. He has decided to take another job, at another school for half the pay, some two hundred miles away.

Coach Harris was reappointed Norwood's wrestling coach, though he was given a letter of reprimand for leaving students unsupervised on the bus.

The principal's son, now 14, is doing better at his new school. He joined the wrestling team and just finished an undefeated season. He's now starting to play football and do weightlifting.

"Maybe it was a wake-up call to get our kids out of that kind of community where people behave that way."—The boy’s mother.

Boys will be boys.

Taunting and teasing and bullying; we’ve become inundated with stories of students being teased and bullied, sometimes to death, by their fellow students, and we say we won’t stand for it.

In Norwood, Colorado, though, the parents not only believe that bullying is some sort of character building movement, they believe that a boy who has been raped by three older boys is not a victim, but a criminal.

A few stats on hazing:
source

since when does the victim become the accused, and the rapists go free? what a crock of shit!

I am astonished at this entry. Where on earth do these boys even get the idea to do such a thing? Obviously no intelligent adult men in their lives.

I'm not surprised. As soon as you mentioned eight-man football, the Dueling Banjos theme went off in my head.

As for why this happened, in rural places like this high school athletes are on the same pedestal as pro athletes for some strange reason I cannot comprehend.

The victims of rape, whatever their sex, face an uphill battle in being believed, in being blamed for their actions, their clothes........you name they get blamed. The police are often not interested and the proof required is not always available for any number of reasons.

It takes a lot of courage to own up to being raped and the justice systems do not help the victim.

such a shame--stories like this make my blood boil!!!

If the victim had been a girl, would the townsfolk have the same reaction? But you're right about what I see as the town not wanting anything to tarnish their precious trophies. Trophies are pieces of plastic, metal and wood and do not take the place of a human being.