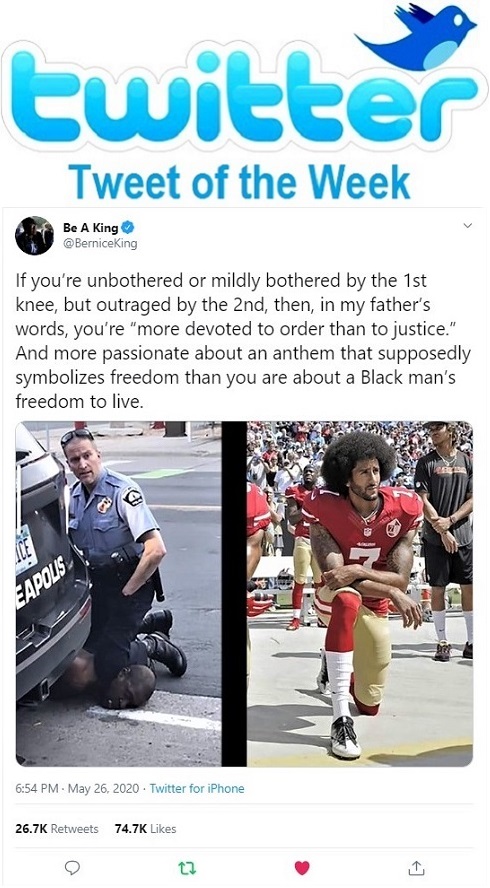 I get so happy whenever I see "Tales of Carlos" at the top. I know very well who Lance Armstrong (asshole... I mean cyclist) is as opposed to Neil Armstrong (the astronaut). HOWEVER... Confession Time: As I started reading, I thought: "Why would the astronaut compare himself to LeBron James and Michael Phelps!?!"

The younger LGBTQ community owes a lot to Larry Kramer.
I watched a doc on Lance Armstrong years ago, creepy guy. Also sickening how butt kissers helped him get away with his cheating.
The last picture is disgusting, that cop is actually enjoying his power over the man, he's getting off on it.

Re the mask situation - San Antonio has something similar which is now under investigation - a local company was awarded a federal contract to provide food services but they have no background in food services - here is a link to the most current investigation by a local newspaper - https://m.sacurrent.com/Flavor/archives/2020/05/26/report-san-antonio-event-planner-that-won-39m-federal-contract-has-history-of-dubious-claims

-I'm really curious to see where the "buddy system" kicked in!! And I would not be surprised if there are a plethora of these "deals" happening under the rug all over the US -

re: beach pic....additional image of charles darwin with his finger to his lips..."shhhh! i've got this!"

Meanwhile, that poor little bitch (Cooper) is whining that her "life is ruined!" Well, actions have consequences - especially when you're caught on video.

Kramer...sad news. Really sad news. But, so many folks in the media seem to forget that he was also a very accomplished playwright that added to the activism.

Clinky the Clown...um, well, they ARE in Texas. Where a very large does of Cheeto's evangelical "christians" reside.

100,000+ deaths and the Dumpster still hasn't attempted to make note of it. Though, The Dumb One did in a tweet about how well the DOW had done. Pass the anti-nausea meds, please.

The President of the Royal Society reminded us that there is still no vaccine for HIV/Aids all these decades after the first appearance of that plague. He also pointed out that we may not have a vaccine for Covid-19 by 2040, because we can't always fid a cure for what ails us.

"I thought for a minute he either believed a bicyclist rode a bike on the Moon, or that an astronaut won the Tour de France."

Wow I didn't know they had also taken Amy Cooper's dog away from her. Like you say, "consequences" for being a racist bitch seeking to make trouble!

Ha! Carlos is right, though. Neil Armstrong is more iconic *hides*
Larry Kramer is gone. His life work -and his anger at inaction and fuckery- stays with us.
Gotta love the cherry-picking of the xtianists. Gotta love it.
Oh, Amy Cooper. If you only knew the arguments I’ve had over this one....,!

In her report last night of Larry Kramer's passing, Rachel Maddow ran clips of 2002-ish interviews, one where Larry referred to a Dr. he knew as "Tony", and another where a Dr. Anthony Fauci(sp?) spoke of Larry's tactics in an informed and (seemed to me) somewhat personal tone...
It surprised me as I had never bothered to look up Dr.F's credentials. I initially took him for another of That Man's lackey's, he has shown himself since to be the best person on the team.

Larry is a hero.

Fuentes... will be indicted the minute the Idiot Jerk is removed.

Hogue is a cherry picker from hell.

@Steven
We, the LGBTQ community, sometimes forgets those who came before, and upon whose shoulders we stand. It's up to us to remind those coming up who lead the way.

@den
Darwin would be sickened by this.

@whkattk
I'd feel bad for Cooper for all she lost--job and dog--but this is all on her for weaponizng race.

@Helen
When we fail to learn from history we are doomed to repeat it.

@MM
Carlos does slay me sometimes, and that Tweet enrages and disgusts me.

@Treaders
In the video you see her lift the dog up by it's leash and collar. She doesn't deserve a dog!

@Jake
Fauci and Kramer were adversaries in the first days of the AIDS crisis, but then they came to work together, and became friends. Tune in tomorrow for Fauci's comments on Kramer's passing.

@Dave
re: Phelps. That's what I said about James and Phelps not losing titles because they were drugging.