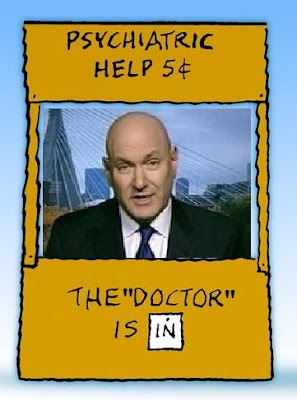 "Dr." Keith Ablow, goosestepping asshatted psychiatrist to FauxNews has a new mission on his hands. He wants to stop America from drinking, and he wants to tell us why Americans drink.
In a piece "Dr" Ablow wrote for FauxNews, he states that "one in every six Americans downs eight mixed drinks within a few hours, four times a month. Twenty-eight percent of young people between the ages of 18 and 24 binge-drink five times a month, putting away seven drinks in one sitting. And 13 percent of those between the ages of 45 and 65 binge drink five times a month, too."
Okay, that's not good. I'm mean, anyone with half a brain, and by half a brain I mean people like "Dr." Keith Ablow, know that binge-drinking is a bad, bad thing. And, while I can somewhat compliment "Dr." Ablow for his interest in stopping some Americans from drinking themselves to death, let's take a look at whom the "Dr." blames for our increased intoxication.
He believes "Americans are on a flight from reality." We're a'scurred for the economy, so we drink. We're afraid of Muslims so we have a shot of whiskey, or ten. And. then he pulls out that old chestnut: Americans are drinking themselves to death because, oh lawdy lawdy lawdy, help me, gay folks wanna get married.
But then he also tosses in immigration, and health care--though he is staunchly anti-Obamacare--as other reasons for our over-imbibing in the liquored beverages, saying, "[W]e as a nation are drinking, drugging, gambling, smoking, Facebooking, YouTubing, Marijuaning, Kardashianing, Adderalling, Bono-ing (as in thinking of Chaz’s sad flight from reality as good), Prozacking, Twittering, and Sexting ourselves into oblivion."
Note how "Dr." Keith Ablow blames the alcoholism of America on everything but FauxNews, and the GOP and Christians. Um, ya think it's because he's paid by FauxNews?
Perhaps. I mean, the Kardashians and Chaz Bono? Really? But Rick Santorum equating gay sex with bestiality isn't an issue. Michele Bachmann saying gay people are of Satan doesn't raise his dander. Newt Gingrich marrying THREE times and fucking around on two of those marriages--though I suspect we'll learn one day that he screwed around on the robotic Calista, too--doesn't bother him in the least.
What a sanctimonious fuck, blaming everything but Republican agenda and the Christians and Rupert Murdoch for people over-drinking.
Of course, at the end, "Dr." Ablow offers up his remedy for our National Alcoholism: God. Yes, indeed, take God into your life, become a good Christan and the urge to drink yourself blind because Chaz Bonbo is transgendered, or Kim Kardashian is a famewhore, or because someone defriended you on Facebook, will go away.
That's how the good "Dr." sees it, or at least how FauxNews pays the the good "Dr." to see it.
source
Posted by Bob at 6:00 PM

He forgot sins of the chocolate!

Yes. I'm on a flight from reality... because of people like him!

Oh my God, now I need a drink! I see he hasn't met the likes of the Mistress yet. He can keep his 5 cents.

I drink because certain beers and cocktails are yummy, and now I need one to tolerate that ignorant "Dr"

I have to have a drink just to lower my IQ enough to communicate with someone like him...

Keith Ablow gives mental health professionals a bad name. Has he been denounced by any professional organizations yet? He should be.

During my drinking days, I drank because it was fun! And I went to Church regularly. (sometimes with a hangover). Now I don't drink, and I don't go to Church. Wonder what he would make of that?!

As I commented when another friend posted this on Facebook, this guy blows. (Get it?) :D

After reading this, I had to drain my beer and go get another. I despise sanctimonious bastards like this!