Christmas Eve With The "Round The Way Gays" 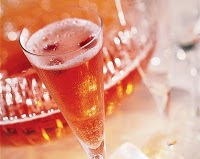 Okay, strip the tree, lights down, garland away! It's over. It's done. Box it up until next year.
Christmas was a mild affair at Casa Smallville. In fact, Christmas day was so ugly and rainy and cold and windy and wet, that, except for a quick doggie walk, we were in our jammies all day! But it was a nice way to spend it; just the two of us, a few gifts, and a nice quiet day at home with the kids.
Christmas Eve we spent with our friends, Neal and David, the Round The Way Gays. They are affectionately known as the "other" gay couple in the neighborhood, at least according to our realtor when she showed us this house. I've often thought back on that, and wondered, if Carlos and I were a black couple would she have said, in those oh-so-precious, hushed Southern tones, "There's another Black couple around the corner." Or, howsabout, "You know, I think some Jews live in the green house over there." But no, it was, "There are some other gay people who live in the neighborhood, too."
Bless her heart.
Still, we met the "other" gays and they met us, and we've become friends in the last year or more. Dinners and movies; parties, festivities. all nice. Carlos told of walking the dog right after we moved in and seeing David at his house. I remember Carlos coming home and saying, "I think I saw one of the gay guys!" A couple more dog walks and he'd met Neal at their house.
So, on Christmas Eve, Neal gave us his take on the meeting. Neal was watering his flowers and Carlos strolled by with the PocketDog. He'd assumed Carlos and his "wife" had moved into another house in the 'hood, and as they chatted, Neal wasn't sure who Carlos was or where he lived. Then, Carlos said the phrase, "My boyfriend and I just moved here from Miami." Neal's hose [water hose, people] went all askew and he scarcely remembered what was said after that! The minute Carlos left Neal, or as he has become known after Christmas Eve, Gladys Kravitz Sr--Carlos is Gladys Jr--hightailed it into the house, shouting to David, "I met one of the new homos!"
And that was how it started. It's been nice becoming friends with our Round The Way Gays.
And Christmas Eve was no exception. Just David and Neal, and David's sister Barbara, and Carlos and me, eating some delicioso desserts and, of course, having a sip of something cocktailish. A Poinsettia. And not the flower. Champagne--which makes everything better--and Cointreau and cranberry juice. A couple of those and I was quite festive.
And then we took the Neal Smallville Christmas Light and History Tour. We saw some fabulous light displays [some people never met a light or a blow-up Santa they didn't love] and some tasteful [simple strings of white lights] displays. Along the way, Neal gave us the history of some of the houses and the folks who live there. Even though this truly is a small-ville, I saw some parts I'd never seen before, so it was a great drive.
It was a nice way to settle into Christmas. good friends. Good desserts. and, of course, Champagne!
Posted by Bob at 10:00 AM

Glad you had a pleasant holiday.

Great post - I had to literally lol (llol?) twice. First at your realtor. Next at the Mrs. Kravitz reference. So does Neal wear a housecoat with fuzzy slippers and curlers in his hair when watering the flowers?

god you make me laugh! the "other gays" sound like great friends to have...

and I am SO ready to put all this crap away and not see it for another year. ugh.

Love the Gladys Kravitz references and Neal's take on meeting Carlos! Indeed, this is why I read blogs.

What a coincindence: the day after Christmas we had Poinsettas at our friends' house. I'd not heard of the concoction before, but knew I'd love them once I heard the simple ingredients. I enjoyed... uh hum... a few. :-)

hee-hee!
Glad you had quite a lovely one~including the history lesson?!
xo

Let's be clear about this. Gladys Sr. does not wear the fuzzy slippers outside. It's too hard to see the dog poo when the leaves haven't been raked! And always wear a bandana when you have curlers in. That makes you more presentable.........
N