It's A Third Less Filling Than Regular Marriage 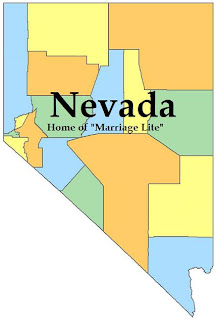 Nevada is now doing the Marriage Lite two-step.
The Nevada Senate has approved legislation that would allow same-sex couples to register as domestic partners and receive many of same rights as married couples have in the state.
Tastes great!
Less filling!
The bill also would include opposite-sex couples who do not wish to marry.
Now see, this is where it gets confusing. Same-sex and opposite-sex marriage? Can't we just call it marriage and be done with all this, for lack of a better word, pun intended, semantics?
This Less-Than-Marriage-But-Gosh-Isn't-It-Close measure still needs approval by the Assembly, but even if it passes, Repugnant Asshat Governor, Jim Gibbons says he'll veto it. The Senate's 12 - 9 vote falls short of the 14 votes needed to override a veto.
“I just don’t believe in it,” Gibbons said of the bill last week.
Yes. You heard him right. I just don't believe in it. Is that the most dumbassed statement in the world? I mean, I'd understand if you spewed the 5,000 years of traditional marriage bull....or even the sanctity of marriage crap....but I just don't believe in it?
Did this fool win an election to be governor, or was it the prize on a nickel slot machine?
Then Gibbons says he thinks Nevada voters won't believe in it either, and points to California and the passage of Prop H8 last year.
Really? Can we all stop holding up California as the example: Looky here, them libruls out there in Callie-forn-eee-yah don't like them gays being equal, so neither do we!
Give me an effin' break.
Take a gander at Iowa and Vermont, asshat. Learn from them.
Posted by Bob at 8:32 AM

Just goes to show that you can never guess how people when really roll when it comes to equality. As long as they've got theirs... f everyone else's.

Some of the best marriages I know about are between gay guys. Bob & Carlos, Dan & Luis, Mark & Spouse, Jeff & Brad, Sam & Bill, and some couples I know around here seem to have the kind of marriages I would have liked.

There are several "opposite marriages" that seem to work well that I know about, too. Marriage is marriage. Some of you can do it well, and some of us didn't make it 10 years!

You said it before, and I repeat it often: Separate is NEVER equal.

Being a residence of Nevada, I will be the first to say. Mr. Gibbons is a fool, and should have never been elected. Not to mention he is in the most gawd-awful divorce ever. Dumbass, and asshat dont do him justice

Miss Janey: Hello there. You're so right! I fpeople would only look around and pay attention, things might change.

Joy: Thanks! I think marriage is tough, legal or not, but we should all have the right to do it as best we can.

Sam: thanks for stopping by again.
I used to have relatives in Nevada and I always thought it was a rather liberal state, what with all the legalized gambling and prostitution and such.
I guess I was wrong.