When we first moved to Smallville, it was so Carlos could take a job running an animal hospital and, one day, while there to pick him up, I noticed a cat in a cage that looked very much like a cat we'd had in Miami, Voncie.

Voncie was devilish and smart and crafty and fast and annoying, and I loved him until the day he died. So, looking at this No-Name Cat who could have been Voncie's twin, I became a petulant little brat, begging Carlos to adopt her.

And we did. And we learned that she was nothing like Voncie. 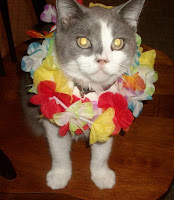 We named her Tallulah Belle because we figured she was a Southern Belle, and our first South Carolina cat, but we soon realized she was really just as mad as a hatter. Tallulah was Groundhogs Day come to life; rare was the morning that, when I came out to greet her, she didn't look at me as if to say, "And you are....?"

But a scratch under the chin and she remembered; and she would jump onto a chair and sit with Carlos and me while we had breakfast, asking for a head scratch or a belly rub.

Our cats are indoor cats, but Tallulah was given the honor of touring the backyard on occasion, and always with an escort. Because she was slow-and-steady, we never feared that she would take off and run; she just meandered and stopped and studied, and, perhaps, wondered where in the hell she was.

She was that cat. 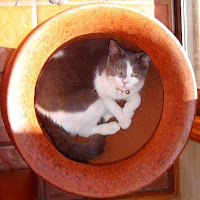 She was also Ozzo's cat, even though she wasn't his first. Those two loved to play, and play fight, and wrestle, always in good fun. Tallulah really wasn't much for games, but she was a sucker for Ozzo, and even he's wondering where she is today.

Tuxedo wasn't much for Tallulah. They spent a great deal of time glaring at each other, maybe raising a paw, until one blinked and ran off. They never fought, but they weren't really buddies, although Tucky loved to run behind her, smack her on the ass and dash away. Tallulah never chased, unless there was food in that direction, or some ice cubes, or an open door.

She had issues with her sinuses, and would, at times, become so congested we would put her in a cat carrier in front of a humidifier and steam her; those times we called her a Steaming Hot Pussy, which was quite the scary name for a cat with two Daddies, but she never complained.

We didn't even know she was sick until the other day when she didn't seem hungry. Carlos felt a lump on her side, and we both knew what that meant. In that way, she was exactly like Voncie; fine one day, and then...Time to make that decision, to decide to do what's best for the pet, and set aside your own needs and wants and desires and hopes. She wouldn't get better, she couldn't get better, and we couldn't hope for that.

All I hope is that her life was better for the few short years that we had her, and she had us, because I know our lives were better having her here.

Breakfast won't be the same without Tallulah at the table, but I'm sure there's a yard out there for her to wander through, and a dish of ice cubes for her to play with, and another cat that looks an awful lot like her to be her new friend. 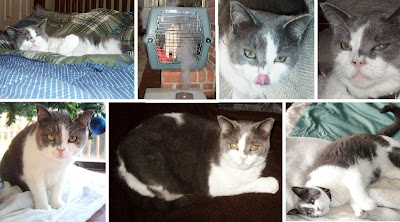 I am so sorry to hear about Tallulah. You can be rest assured her last years were probably the best of her life. I too have lost "kids" and as much as it feels like my heart is being ripped out, i know it i the merciful and kind thing to do for them. Much Love to you both!!!

Brought tears to my eyes. Thanks for sharing.

Your blog is as beautiful as she was. I know it's far from easy to cope with her departure but I'd gently nudge you to take some solace from the knowledge that you enriched each others lives. (On a far more distant scale, she certainly enriched ours!)

Sorry to hear that, Bob

I know her years with you and Carlos were good ones for her, years in which she knew that she was loved completely and unconditionally. Sweet dreams, Tallulah.

So sorry to hear about Tallulah! Cats are funny that way - they all have different personalities but at the end of it, they are cats.

A very moving tribute Bob to your friend and loved member of your family, Talulah. There is no power greater than the unconditional love she gave to you and Carlos. You were very fortunate to have her and she you.

Once again, I'm sorry to hear about Tallulah's passing. You & Carlos gave her a great home and hopefully she is out there doing all the fun things she liked to do.

This brought tears to my eyes. So beautifully written. Sending you hugs from Sevilla for sweet memories of a beautiful, eccentric member of the family.

We have had pets go from healthy one minute to dead the next day. Our last doggie had a several year long decline, that was hard to watch. Some days we knew she didnt know us, but were happy to see these strangers anyway!

No matter how they go, its always painful. They are our children our best friends, and the best tear blotter known to man. They love unconditionally, if only we could manage to do the same.

and it is SO hard to let them go.

Our condolences on losing Tallulah. Anne Marie (in Philly)and I know how hard it is to make the right decision, but like you, we're comforted with memories of the years our cats spent with us.

I'm sorry for your loss and unfortunately know too well how it is. They bring such furry goodness to our lives, and we miss them. Hugs! xoxoxoxoxo

Sorry to hear the sad news.