Democratic Party chairs from eleven states have, well, to co-opt another phrase, "come out" to endorse adding Marriage equality to the 2012 Democratic platform.
And they are:


These eleven join a growing number of Democrats who have endorsed putting marriage equality in the platform, including Democratic National Convention chair Antonio Villaraigosa, House Minority Leader Nancy Pelosi, U.S. Senate candidate Elizabeth Warren and nearly two dozen U.S. senators.
Freedom to Marry launched its Democrats: Say I Do campaign with the goal of adding marriage equality to the Democratic platform in March.
New York Democratic Party Chair Jay Jacobs: “Nearly a year ago, New Yorkers stood united in supporting full marriage equality for all loving and committed families, and Democrats led the way. We now see first-hand how marriage improves the lives of gay couples and their families, and strengthens businesses and communities throughout the Empire State. Marriage equality is simply the right thing to do, and that's why I strongly believe that the Democratic Party should stand united for a freedom to marry plank in our national Democratic Party platform.”
Nearly 40,000 Democrats have added their names to Freedom to Marry's Democrats: Say I Do online petition.
Why don't you sign it, too? 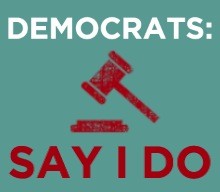