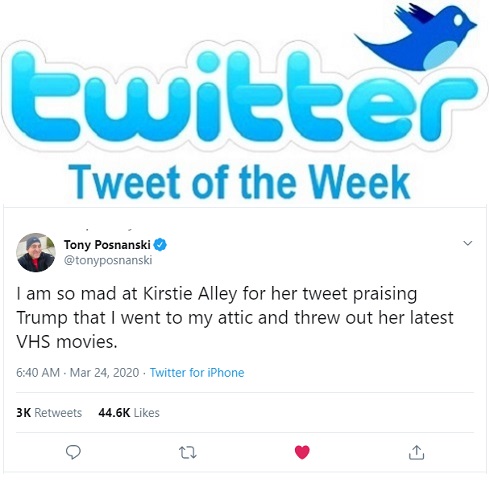 And you and Carlos are simply adorable. I giggled at your story! ^.^

How many points do you get for climbing Denis? I mean, things will certainly be hard. :-)

You know, if Carlos is smart (of course he is!), he'd just let you do all of the work since he's going to lose anyway. Just a thought.

Christian Siriano and Kevin Johnson, proof that altruism is still alive and kicking in this ____tastic world.

My Maltese, Cujo, is a son of a bitch, but I wouldn't put him in the same category as Denis. That man's a mastiff! Nice.

Stay safe and I think Hawaii
is a good place to visit!

If I have to wear a mask, how fun would Christians be?!?!?

And come on Bob, if Fawell doesn't open up Liberty University, how will he find his next poolboy and blow jobs?

Congrats to Starbucks. Bloomie's is the same for us. While closed, full time will get 35 hours, part time 15 hours, indefinitely while we are closed. We too, if choose, can use PTO to supplement up to 40 hours if we want.

And I have long adored a Russian man...especially when in bed and I hear that accent

Bob, I didn't know you were criminal!

That model is the only good thing about Russian interference I’ve read in awhile. Hot damn!
I’m gonna have to have a convo with Carlos, Bob. Bob!
Christian and many people from theater and the arts have jumped to help NY. Kudos!
Fuck Harvey and fuck Kristie and fuck Falwell. Ugh.

That poor Russian boy obviously needs a good job so he can afford to buy a new pair of trousers!

@Hot
Yes, to all, even the 'you and Carlos are simply adorable" part!

@whkattk
It'd be a lot, cuz that looks like a workout, even after you reach the summit.

@DeeDahLah
Shush. Carlos hasn't figured that part out yet!

@TDM
i could do Hawaii!

@MM
christian came off as a self-involved twit on his season of the PR, but it's nice to see that he's evolved and stepping up in these times!
And I can hear Denis murmuring sweet nothings in Russian to me right now.

@VRC
That was a lot, so thank you, and glad to know that you're enjoying whatever it is I happen to say!

@Six
Yes, he's the kind of Russian interference I like .... Russian UN-Dressing.
And all the little tortures I give Carlos are done with love and a whole lotta laughter!

@Helen
Yes,i like Siriano even more now.
And don't you dare give my Russian new pants!

bob bob bob, you are cheating on those points! bad boy!

I never really warmed up to oprah or her "gal pal". (wink wink)

Christian Siriano and starbucks - bless you!

fuck harvey and falwell and the entire dump family!

*Carlos is getting the short end of the stick. A technical question, are points designated ahead of time for all said chores? I would be screaming foul if this was not the case.  But hey, good friendly competition is fun.   I am sure you are aware that where you go on your adventure Carlos is going too. I call it a win/win. Carlos is playing along and smiling as he takes down your SUITCASES.

*To be frank, I never cared for Gayle K. She is not a well-rounded reporter and is into both sides thing. She does not want to offend so she is bland. Sometimes you have to let the facts speak for themselves and address them head-on. The other side, at times, is less relevant.  Don't piss on my leg and then tell me it is raining outside. I had a hunch when CBS revamped the show they were not going to get rid of her. They get a two for one with her-Oprah and Gayle. Her salary doubled when renegotiations came along. I don't care for the shtick of being afraid of everything. Also, it is always about her. I know she pissed off Nora O. on a few occasions where she was not playing by the TEAM rules. Fun fact. She wanted to be on The View but Barbra W. said no. Barbra knew that Gayle comes with Oprah.

*Jerry F. did not "invite" the students and employees back to the fake college. They were "told", "mandated." There is no choice. I am sure that if people don't comply there will negative consequences.

*Starbucks-I am certain that PR folks told them if they did not do a social good here it would dramatically affect their bottom line when the pandemic is all over. Could they afford it? I am quite certain.

*Denis is cute. I am from the old school. All this shaving to the inch of your live and buff thing is just too much. I look at guys like these Instagram accounts and 99.9% of the posts are of them. Too much.

*Harvey-Poor guy. Only a mother could love. He deserves everything he got and then some.

*Kristie-Gave up on her long ago. She whines too much for me. The tweet was a burn. She is not relevant.

OK-Back to our regularly scheduled programming. Take care of Carlos. Be safe. Oh yes, thanks for all your hard work on our behalf. It is my daily highlight.

You watch, all those Crazy Christians are going to throw their support behind the Idiot Jerk, no doubt because he's told them that if they don't he's going to start collecting their souls.

Dear Lord, I wonder how many hospital employees know they're going to be wearing designer masks.

Did Carlos have any idea how this competition was going to work? Um, stunning Denis Suraev... steroids much? Fine people: Kevin Johnson, Chuck Schumer, Christian Siriano!